Club Med Samoens – The skiline.co.uk team get a sneak preview before the opening in December

The Ski Line team were the first agents to get a sneak preview of the new 4 trident (4*) Club Med hotel in Samoens. It’s this kind of “inside” knowledge that sets us apart from the other Club Med agents, even Club Med’s own’s staff haven’t seen it yet! 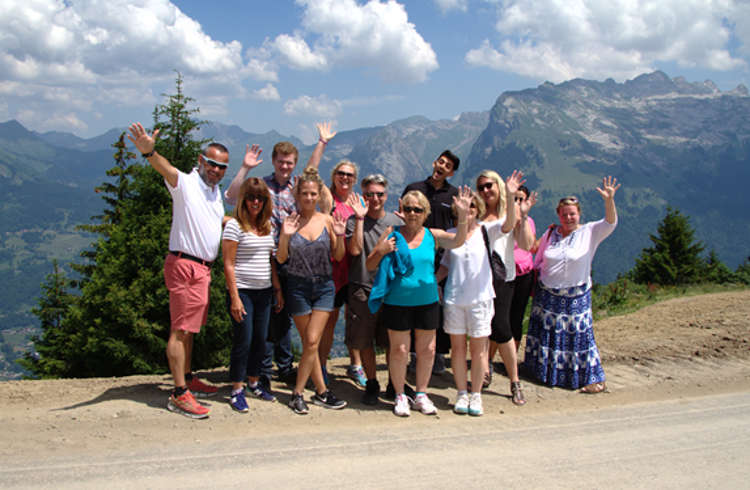 The Ski Line sales team visiting the New Club Med Samoens all-inclusive resort, ahead of its opening in December

If you are considering a skiing holiday at the new Club Med all-inclusive ski resort at Samoens this year, you can speak to any of our team, we are probably the only people right now who know it inside and out and we are ready to get you the best deal.

Location is everything on the best skiing holidays, you couldn’t get a better location for skiing than the Plateau Club Med chose high above Samoens at 1600m. From here with just one lift you can either ski down to Morillon or Les Carroz, or with just two lifts be skiing over to Flaine and ski back to Sixt via our favourite blue run, the 14km Piste des Cascades will give the illusion that you are skiing the back country rather than a perfectly groomed blue piste.

We enjoyed unrestricted access to this fantastic new hotel on our visit last week, which is in the final fix stage with painters busy painting and carpets about to be laid.

The landscape gardeners have started the planting and the new beginners magic carpet is installed and ready for testing. We saw several rooms, some of which are now ready, except for mattresses and bedding. The rooms felt very spacious with sexy lighting and the en-suite bathrooms to delight.

We are told everything is ahead of schedule for the opening this December. We can’t wait to go back. 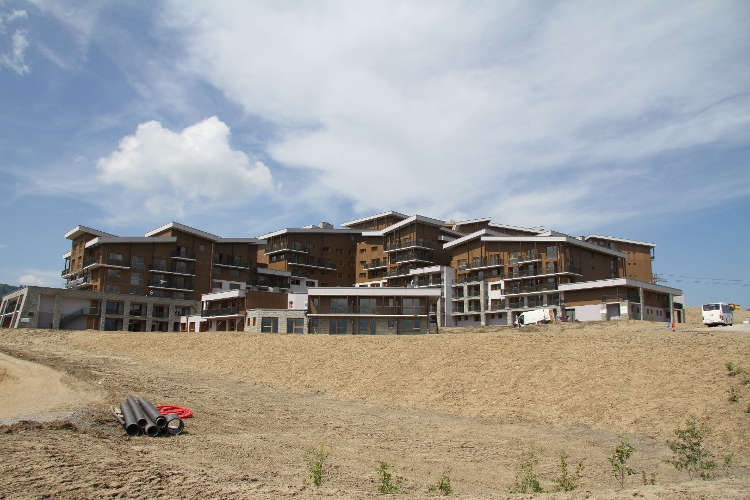 Landscaping at the new Club Med hotel in Samoens is nearly completed, the planting has just started.

Every new Club Med ski hotel that’s opened in recent years has been an improvement on the last! We struggled to see how Club Med could improve on the Club Med Sensations in Val Thorens, which opened two years ago, it was never going to be easy but we all agreed they have smashed it with Samoens. All the little grumbles we had about Sensations, liked the busy ski locker area have been fixed at Samoens, there is loads of space for guests even at the peak of the morning rush. In Samoens, the hot tubs are both indoor and external, unlike the one located on the balcony at Club Med Sensations.

There are three dining areas for adults and an exclusive family dining area, in addition dining terraces and balconies surround the building to take the full advantage of the spectacular alpine views. Of course, the popular speciality al a carte restaurant is larger than anything Club Med have done before, the cost of which is included in the price of your holiday. If you are wondering if the food at Samoens will match that of Sensations, the answer is a positive YES! The same double Michelin-starred chef has created a special menu for guests and we are told the hotel’s wine cellar has some interesting options. 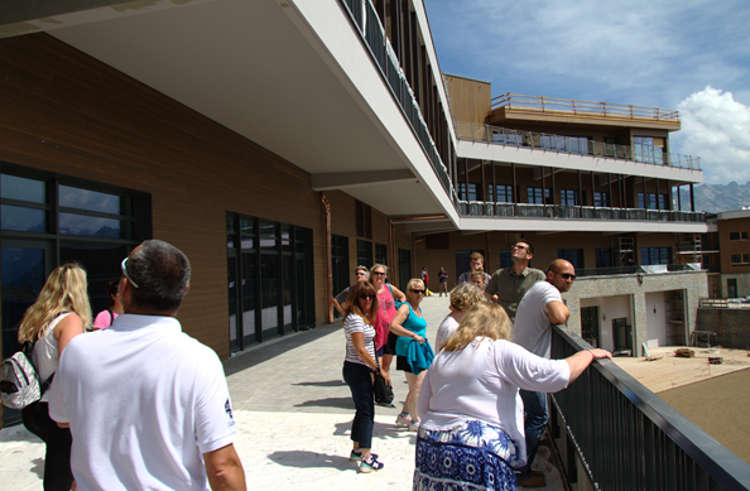 One of the dining balconies at Club Med Samoens offers up spectacular views of the Grand Massive mountains.

The spa area is massive with a huge heated indoor pool with a separate small, safe children’s pool which will be a hit with the youngsters. We believe the open air pool will only be open in the summer months.

The Ski Line team looking over the spa area at the new Club Med Samoens hotel which opens December 2017.

Club Med have embraced the latest technology! Gone are little bits of cotton the GO’s add to your wrist on arrival, its replaced with a new digital bracelet which will open your room and ski lockers and allow you to charge purchases from the shop, spa and ski rental (if it wasn’t pre-booked). 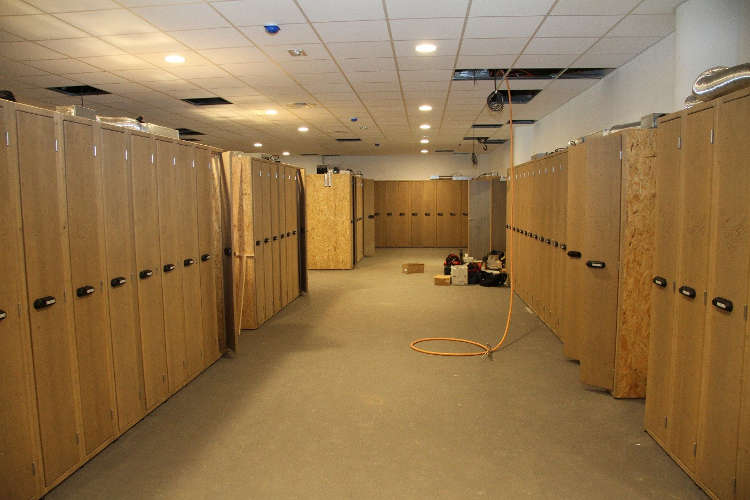 The spacious ski lockers in Club Med Samoens open on to the piste, where you can ski from the door

If you are looking for a new ski resort to try this winter, you will be hard pushed to find a better location or ski area than the fabulous new Club Med Samoens hotel which opens in December 2017 for the first time. Prices start at just £1,230 Which includes all the normal bits Club Med include, such as a full area ski pass, snacks and drinks throughout the day, 5 x full day ski lessons or for the more advanced skiers and snowboarders off piste ski guides. A massive skiers breakfast, 3 or 4-course Lunches with wine and 4 or 5-course evening meals (with wine). Even your cocktails and alcoholic drinks are included.

We know our clients will love the skiing in the Grand Massif ski area, as it’s Frances 4th largest connected ski area covering a ski range between 760m to 2561m with some 265km of runs. Isn’t it time you tried the skiing in The Grand Massif area? It’s a great choice for intermediate skiers and advanced. Beginners will be particularly well catered for with the beginner slopes right outside the Club Med resort at Samoens 1600m.

The location of the new Samoens hotel is outstanding, located on a plateau high above the beautiful village of Samoens with 360-degree views of the surrounding peaks. Even in the summer, the mountains looked spectacular and we can’t wait to return in the winter.

Club Med are pitching the hotel at families, its easy to see why it will appeal. The transfer time from Geneva is just under an hour, making it one of the most convenient ski resorts to reach. There are a very large number of interconnecting rooms ideal for family groups, several of the rooms are triples and comfortably can accommodate a child.

Club Med have plans to open a new ski hotel every year for the next 3 years, December 2018 see’s the opening of a new hotel in Les Arcs 1800 and in 2019 the “Ski Line” hotel, which we assume was named in our honour, will open in Tignes and will include an indoor ski slope, yes that’s right we can hardly believe that either! 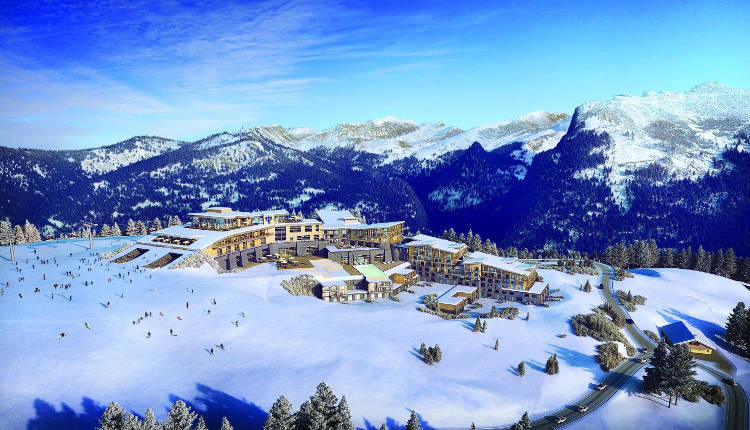 The New Club Med hotel at Samoens is certainly in the running for the Ski Line Ski Hotel of the year. We will be announcing the winner later this week.