Why Ski in Mammoth?

Situated in the Sierra Nevada mountain range, around 6 hours drive from Los Angeles you will find the fabulous ski resort of Mammoth.

There’s a good variety of runs from beginner to expert and the snowfall is very good with an average of 385 inches in a season. It’s higher than most other Californian resorts having a maximum height of 3370m and with its mainly north facing slopes holds its snow well.

Not as large as its name suggests but still large enough to keep most skiers happy for a week.

You will need a car in this resort as most lodgings are not situated at the base. Most buildings are timber clad so it does retain some alpine charm although it does not in essence have a village ‘centre’. There are two main bases close to Mammoth Lakes where you will find most restaurants and other amenities. Canyon Lodge is the largest and Eagle lodge comes a close second. There are two more bases, The Mille Café and Main Lodge which are approx 4 miles away. Shuttle buses link all of the bases although these can be unreliable in the mornings and only run until midnight.

There is another much smaller Mountain called June which is blissfully quiet and lies about a half hour drive away but it covered on the Mammoth lift ticket. 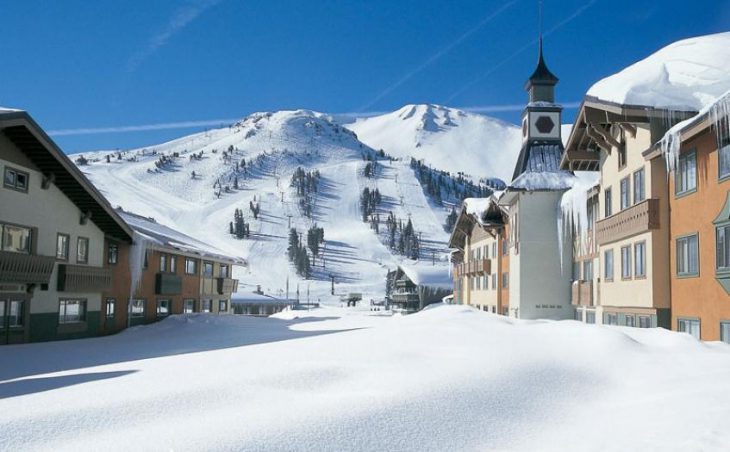 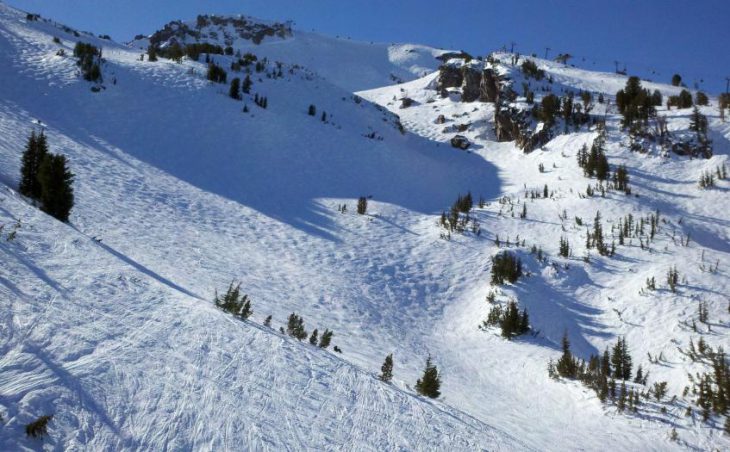 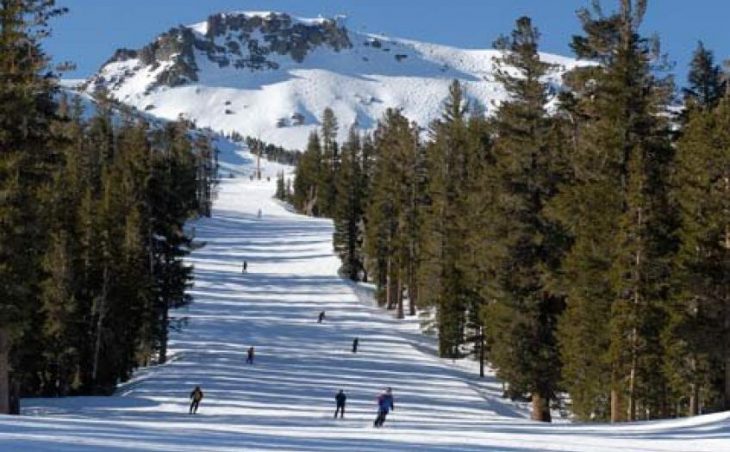 This is an brilliant resort to take a beginner to with over 70km of trails to choose from they will be spoilt for choice. There are excellent reports about the local ski schools who have small classes and great instructors.

From Main lodge take the Discovery chair, or from Canyon lodge take chair 7 or the schoolyard express to quiet easy green runs once you have progressed from the nursery slopes.

The lower parts of the mountain below the tree line make for great cruising intermediate runs. There are some slightly more challenging blue/blacks to head for if you are un upper intermediate which can be found at the top of the Cloud nine express and Chair 25.In fact you will find good intermediate runs all over this extensive ski area.. The terrain parks here are brilliant if you fancy some extra activity.

There are steep bowls running all over the mountain with many double diamond runs to challenge even the most accomplished expert skiers. Even though most of the expert runs are short my European standards there are many of them at all levels, even lower slopes have their fair share too. Try chair 5 or 33 on the lower slopes for some good sheltered steep stuff. The terrain parks are brilliant fun too.

This resort is a mecca for snowboarders, its terrain parks are among the best in the world and are all accessed by fast chairs or gondolas. The pistes must not be underestimated though as they are on a par with the parks and offer plenty of bowls, chutes, tree lined runs and steep cliff faces to get the adrenalin going.

This resort tends to get busier at weekends with many places offering live music and dancing. There are various different places to suit all ages, at Main Lodge there’s the Yodler bar which apparently is a genuine Swiss chalet, Tusk is another bar and from here you can watch the folks at the terrain parks.

Whiskey Creek has live bands at weekends and tends to stay open until very late, if sports are your thing, head for ‘Grumpys’.

Eating out in Mammoth is easy as there are over 50 restaurants to choose from with a variety of cuisines. How about Shoguns which is a Japanese restaurant, or Gomez’s for Mexican., Chart house specialises in seafood. Angels is recommended for good service and great prices. If you fancy eating on the mountain you can even take a Snowcat up to the Parallax restaurant.

Activities off the slopes in Mammoth

As with most ski resorts the views are great and sight seeing is the main pastime to be had in Mammoth. A 40 min drive south will bring you to the town of Bishop which is a good diversion should you wish to walk and browse and there are factory outlet shops along the way for bargain hunters. Mammoth also has ice skating.