Why skiing Val Thorens is such a good idea

Val Thorens is not only Europe’s highest ski resort (2300m) but its part of the biggest linked ski area in the world, the Three Valleys offering some 600km of perfectly groomed pistes. Val Thorens has the highest point in the whole of the Three Valleys ski area at 3230m. The resort normally opens in the last week of November and stays open, normally, until the first week of May.

Val Thorens is now heading upmarket too, with the 4th Five star hotel just opening, Club Med also opened its fabulous newest all-inclusive resort, Sensations, in Val Thorens last winter to huge press acclaim and was the winner of our ski hotel of the year 2014. Val Thorens has come a long way since the first 3 tow lifts opened the resort in 1971.

Looking at the piste map Val Thorens is on the far right hand side, high above Reberty and Les Menuires and further below is the beautiful village of St Martin du Belleville. Val Thorens makes up one of the three valleys and there is some wonderful skiing to be had.
The middle valley is Meribel and Mottaret, a mecca for keen devotees of the Three Valleys ski area. On the far left is the Courchevel valley with the 4 Courchevel villages, which have now been renamed to names nobody can remember, so we stick to the village heights of 1850, 1650, 1550 and 1300 and also the wonderful chalet village of La Tania.

The local slopes in Val Thorens

There is no question that the Three Valleys is one of the best ski areas anywhere but how about the local slopes? 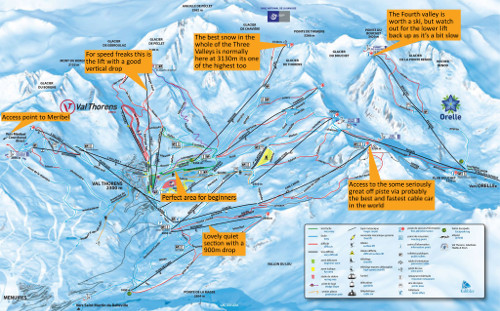 All levels of skier are catered for in Val Thorens from the network of easy greens near the village where the snow is always perfect due to the resorts height. The progression slopes are excellent too, with wide blues perfect for building confidence in the later part of the ski holiday. Intermediate skiers will love the drop down to Orelle (known as the fourth valley) although the lower lift is a bit slow on the way back up. The resorts choice of red and blue runs in the local area are superb. If you are buying the full area ski pass we particularly recommend the runs down to St Martin, wide fast blues and reds will get the adrenalin pumping. With the full area covering more skiing than you could possibility cover in a week, we know you will want to return.

The slopes around Val Thorens are mainly for intermediate skiers but the black from the Cine Caron cable car, which must be one of the fastest in the world and holds 150 skiers offers a challenging black but it’s the off piste runs that are the biggest draw. The altitude here helps keep the snow powdery for longer. If you are an off piste skier you must try the 1400m drop from the Caron cable car, the north and NW facing slopes keep the snow in great condition, even at the end of the season.

Standards of accommodation across the Alps has been raised in recent years and Val Thorens is no exception. Many of the catered ski chalets we offer are apartment styled chalets rather than free standing chalets as found in say Meribel. The most popular accommodation type is still the ski chalet in Val Thorens.
There are some excellent hotels now in Val Thorens including four 5* hotels and our favourite, Club Med’s Sensations. Most of the chalets, hotels and apartments in Val Thorens are ski in ski out or very close to the skiing access points.

Folie Douce is where it all starts in Val Thorens, just like its sister bars in Val d’Isere, and Meribel things really kick. This franchise understand the après ski better than any, dancing on the tables is “almost” compulsory. So too it seems is fire eating for the bar staff!

Later on the Red Fox and The frog and Roastbeef are always popular. If you prefer your music live head for the Malaysia Cellar bar, things gather pace here from about 10:30pm and goes on until the early hours.