The ultimate guide to skiing in Portes du Soleil

Portes du Soleil is perhaps the easiest and quickest of the big three ski areas in France, to reach from the UK being within an hour’s drive time from Geneva airport. This is a fact not lost on many British families who choose to ski in the Portes du Soleil each winter because of it easy journey and convenience.

This ski area is popular with intermediate skiers who enjoy the circular route that gives a feeling of real travelling on skis. 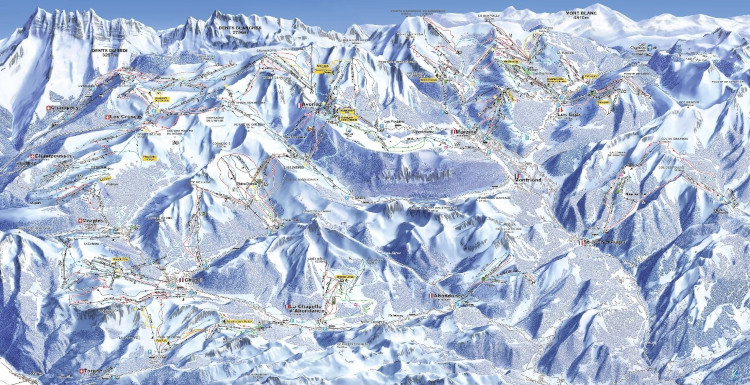 The Portes du Soleil ski area quietly dropped its claim to be the largest ski area in the World because it wasn’t, (Three Valleys ski area holds this crown). It is certainly the largest internationally linked ski area, straddling the border between France and Switzerland. It “Claims” to offer about 650km of linked pistes that are mainly intermediate terrain.  That’s 50km more than the Three Valleys! Confused? (see our blog on piste length)

There are 13 villages in the Portes du Soleil ski area, Ski Line offers accommodation in the 5 main villages within the ski area, Avoriaz, Chatel, Morzine and Les Gets on the French side, and Champery on the Swiss side. Each of the 5 villages is quite different, and its contrast in styles of villages are the draw for many skiers and boarders.

Avoriaz is the highest and normally, most snow sure. It’s a car-free area, and horse-drawn sleighs can offer shuttles between the car/coach park and the hotel, chalets and apartments in Avoriaz. A big draw for families is the Centre Parc’s styled waterpark, complete with flumes and wave machine, ideal as a reward for the little ones or if the weather closes in and skiing isn’t an option. 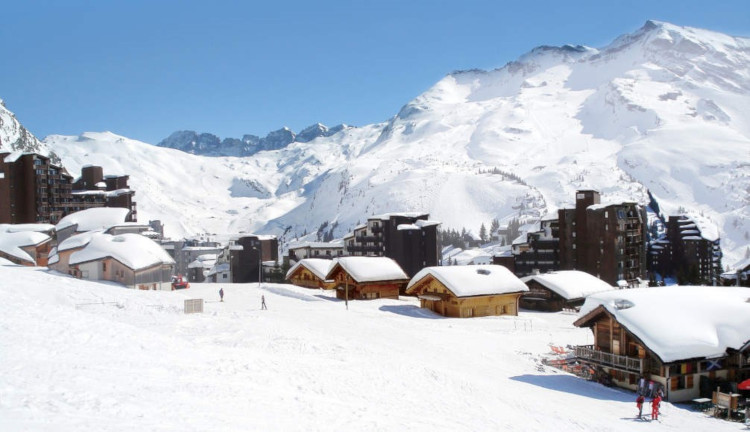 In the last few years, a handful of catered chalets have become available in Avoriaz and these have proved to very popular (early booking recommended, in fact definitely required) In addition there are several hotels and lots of apartments which are 5* or more basic to suit all tastes and budgets.

The lift system around Avoriaz is generally modern and fast. Connections to the slopes around Chatel and Champery are excellent. A few years ago, a new lift did away with the need to use a bus connecting Avoriaz to Chatel, which was a huge relief to regular skiers in this area.

The big attraction for snowboarders is the halfpipe, excellent snow park and good runs for all levels of boarders.

Chatel is a typical and unspoilt alpine village, something that’s really quite rare in a village connected to such a large ski area.  The village has a very French feel and even today there are around 30 farms in and around Chatel. Devotees to Chatel wouldn’t stay anywhere else. 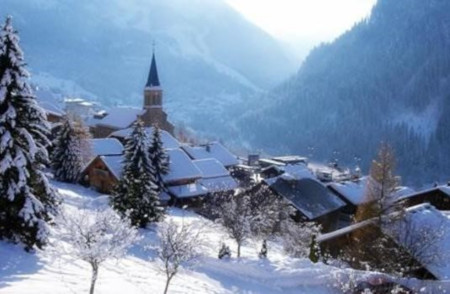 The skiing has greatly improved in Chatel after new lifts replaced the bus in 2015, and the addition of a new blue run down from the Super-Chatel sector.

The skiing around Chatel is best suited to intermediate skiers, although experts and beginners won’t be disappointed with the skiing here.

From Chatel the links to Avoriaz and Champery are excellent, but it’s a long trek to Les Gets and Morzine.

There is a limited choice of independently operated ski chalets in Chatel and a handful of hotels and apartments.

Champery is the best known of the Swiss villages in the Portes du Soleil.  Again, with great terrain for intermediate skiers.  The slopes are mainly sunny, and two wooded runs give protection from the sun and snow but expect delays on the cable car returning after a day on the slopes if the snow conditions are poor. 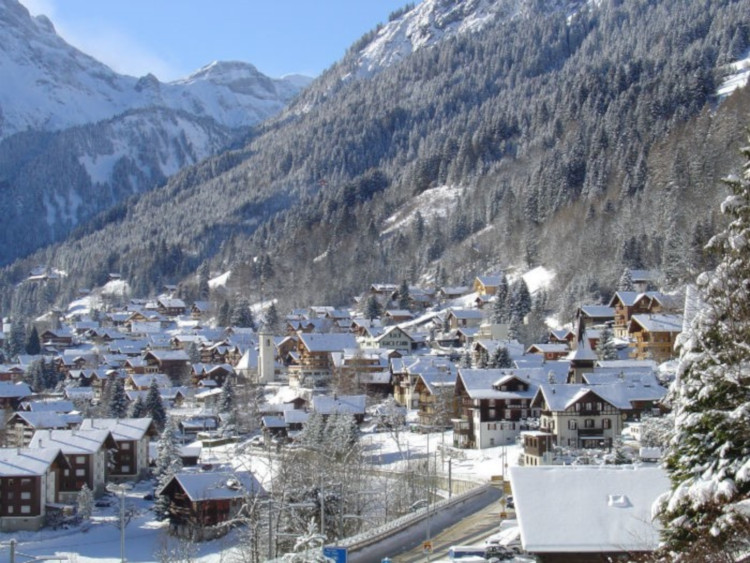 The village itself has mountain appeal, wooden chalet buildings are spread over quite an area, but local buses connect to the properties on the edge of town with the main cable car from Champery.

The scenery and views around Champery are some of the best in the area beneath the dramatic ridge of the Dents du Midi.

Morzine is the most popular village with Ski Line clients, we have a lot of chalets there and the transfer time from Geneva makes it a popular choice with families and with skiers looking for short ski breaks and weekend skiing.  Why waste time on a minibus, when you could be skiing?

Morzine is a real working village, although it feels like a small town and it’s a busy destination in both summer and winter. It shares an extensive local ski area with Les Gets which offers gentle slopes and wooded valleys.  From Morzine a cable car connects in one way to the higher resort of Avoriaz or in the other, it connects to Les Gets.

Les Gets is at the far side of the ski area just beyond Morzine, it works very well as a stand-alone ski resort and is especially popular with Families. Les Gets also has its own “almost secret ski mountain” a ski resort within a ski resort, called Mont Cherry, which enjoys wonderful views across the village and to the Mont Blanc beyond. Because it requires a walk from the lifts connected to the rest of the Portes du Soleil it is often deserted, even in the peak weeks of the season. 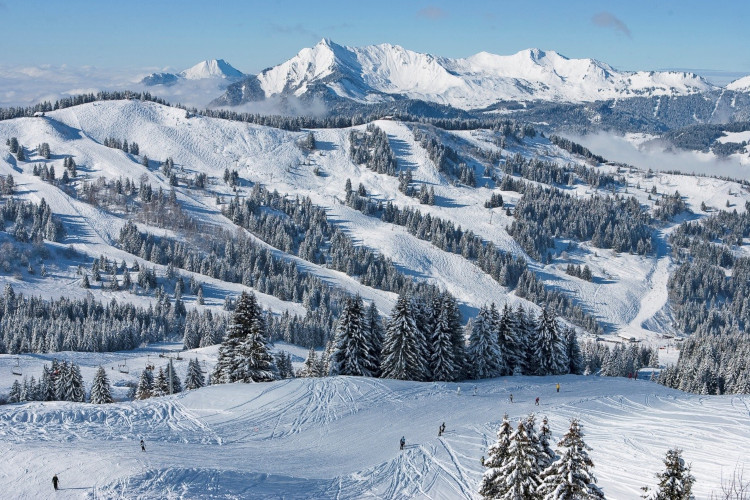 The local ski pass makes a lot of sense for many of our clients, its €100 less for a start and because Les Gets its quite a long way from the rest of the ski area, many families don’t bother with a full area pass preferring to stay in and around the village especially if they have young children to pick up from ski school.

The options of a ski pass in the Portes du Soleil are either the local ski pass around each village or the full area pass.  Most of our clients in the more central villages choose the full area pass, which would be our recommendation, for an extra €10 a day the choices of runs and terrain open up and you are spending less than if you chose to ski in the Three Valleys or Espace Killy.

About the skiing and snowboarding

This ski area is ideal for mixed ability groups, there is often an easy way and more difficult routes from the top of each lift, so mixed ability groups can still spend time on the slopes together.  For Intermediate skiers, it’s just about perfect, but we have written a few paragraphs below to help you decide which resort to have as your base and the skiing you can expect to find locally and beyond.

For expert skiers in the Portes du Soleil

The Black runs from the back of Mont Cherry mountain in Les Gets are steep and very quiet and really worth the effort to get there, especially when the slopes are busy.  In the Chatel sector, the off-piste and the best expert terrain is in the Linga and Pre-la-Joux area. On the way from Super Chatel towards Torgon, try the Barbossine, this steep and long black scared the pants off our MD! There are some good testing runs on the Swiss side too. The Swiss Wall, once the signature run from Chavanette is now left ungroomed and good fun. 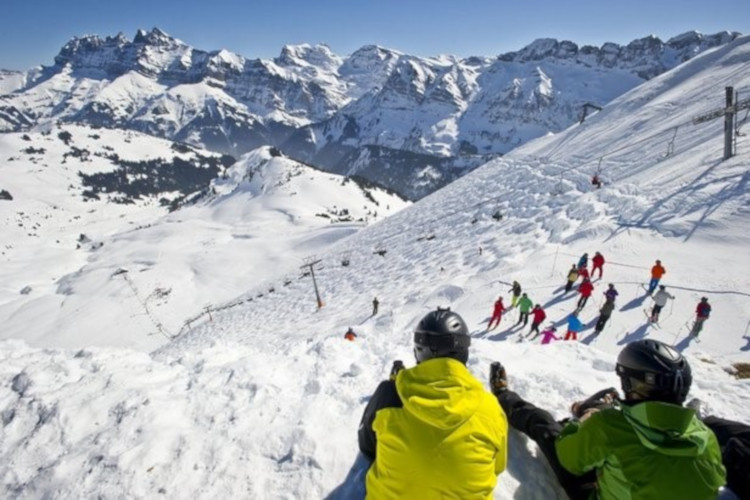 If you are booking a guide, ask about doing the off-piste behind the Tele du Linga over to the next un-skied valley, it’s a legendary off-piste trail, but only do this with a guide!

Close to Morzine in the Nyon area, take the Chamossiere chairlift, and heading northwards you’ll arrive at two runs, one marked on the piste map as a free ride run, the other drops to the Nyon cable car via a col and has excellent views of Mont Blanc.

There are good and there are not so good intermediate skiers in most groups, we think this ski area works perfectly for all levels, the only problem really is where to stay? If you like to Cruise and travel distances on your skis, you won’t be disappointed you chose to ski in Frances second largest ski area.

For beginner skiers in the Portes du Soleil

For complete beginners who will start on the nursery slopes, it will depend on the time of the year you are skiing. Some of the lower villages, whilst their nursery slopes are convenient, they can suffer from a lack of altitude early and late on in the ski season. With this in mind, Avoriaz wins top trumps.  Avoriaz’s nursery slopes are in the sun and manage to hold the snow in good conditions. The progression slopes are excellent too, long and wide and confidence building. 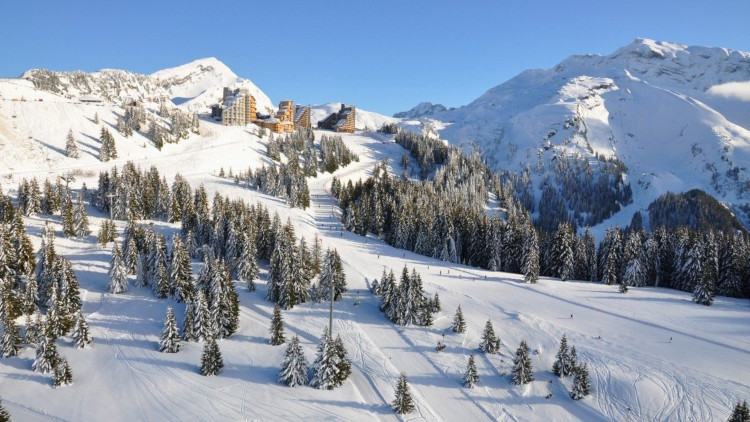 In Les Gets, our clients love the Chavannes nursery slopes above the village. There are also 4 free lifts, which could save paying out for a lift pass, the cheeky lift company charge you for the return gondola trip to get up there…. the village nursery slopes in Les Gets are perfect, if the snow is good, but in spring, they probably won’t be! The rest of the year it should be OK, let your ski school decide where is best.

The beginner’s lessons in Champery are held on Planachaux runs which are steep and isolated and the good progression runs are also steep. Many of the runs here which are classified as blue, would be red’s in other ski resorts. Champery could, therefore, ruin the first experience of skiing for many, so isn’t recommended by us for beginners.

Chatel has two very good beginners areas, neither are convenient for the village, (the village nursery slope often has no snow cover) However this lack of conviction is part of the skiing experience, isn’t it? The choices are a bus to the slopes at Pre la Joux…..or our preferred option, the gondola ride up to the slopes at Super Chatel, a much more exciting start for a beginner than a bus ride! The slopes here are excellent, gentle, and away from crowds and more experienced skiers. Beginners will probably want to catch the gondola back down too, for the first few days at least, as the route back on skis is steeper and narrow in places and can be icy at the end of the day, a proper progression slope!

The trouble with Morzine’s nursery slopes are the crowds, fortunately, they have snow cannons so the snow is always good, unfortunately, more experienced skiers love this slope too. If this hasn’t put you off, you’ll be pleased to hear the progression slopes are excellent to Super Morzine, Le Pleney and Nyon, so if the beginners are fit, young and strong and not concerned by the odd speeding skier, Morzine is a great choice.  For young children, we prefer Les Gets or Avoriaz. Sorry, Morzine!

Avoriaz is the destination of choice, there are plenty of runs, an excellent snow park and half pipe to keep you busy for a week or more.  It’s definitely the first choice with our clients.

Morzine too offers a variety of runs and few drag lifts but most who choose to stay here do for the nightlife and head up to Avoriaz for the boarding. Advanced boarders should consider a guide to reach the best areas around Morzine.

Chatel is good as a budget base but stay here and you will be heading to Avoriaz like the rest, it really is the hardcore choice for snowboarders.

Les Gets is a great place to learn to snowboard and the local runs suit nervous intermediates too.

Champery is Ok for expert riders, there are some good powder stashes, but for all other levels of boarders, forget it, steep runs and drag lifts, you’ll be wishing you stayed in Avoriaz.

See all our ski holidays in the Portes du Soleil