The best way to avoid an avalanche

Being caught in an Avalanche is a frightening prospect for any of us, the best way to avoid the dangers is not to get caught in one in the first place

Very few avalanches occur on the pistes, as the ski resorts are very good at managing the risks of this happening. The greatest dangers occur off piste. Ski Touring and skiing off piste is becoming increasingly popular and although all the resorts will set off explosions to manage the risks, accidents still happen. In the winter of 2013 this was bought home to the staff at Ski Line when one of our chalet tour operators Chris Longbottom was swept to his death whilst skiing with family and friends near Chamonix. Chris was an experienced skier and most of us at Ski Line had enjoyed skiing with him in both Verbier his home town and Zinal where he had chalets. An avalanche could be triggered even on a slope of 30 degrees and it’s when the warnings flags are considered level 3 that most deaths occur, on average 57% of the recorded avalanche deaths are at risk level 3, whereas only 8% of deaths occur when the risk is level 4, perhaps because fewer skiers will venture off piste when the risks are higher. If you are going to ski off piste, we’d always recommend you hire a profession local guide, this will cost around €300 for a day in Europe. Local knowledge is key to safety.  Never ski off piste on your own.  Ski in groups and make sure you have the basics of safety equipment with you to include a spade, snow probes, and transceivers to help you find anyone in the group who is unlucky to be buried. You will only have about 15 minutes to find a person buried before the risk of death are a certainty.

ABS (Air bag systems) back packs are becoming increasingly popular. This are backpacks with a built in air bag, that operate much like a car airbag, in that they are fired by a compressed air cylinder that when activated by the skier inflates 2 wing type airbags that are designed to keep you on the surface rather than burry you under the snow. If you shake your cornflakes box the larger pieces stay at the top of the box and the small pieces fall to the bottom, so the idea of the air bags is to act like a big cornflake!  Most airlines won’t allow ABS packs to be carried on flights because of the compressed air, but they widely available to rent in most ski resorts.  If you want to own your own we recommend companies like Snow and Rock who’s staff are trained to give the best advice on the best ones to buy. Prices start at £400+ 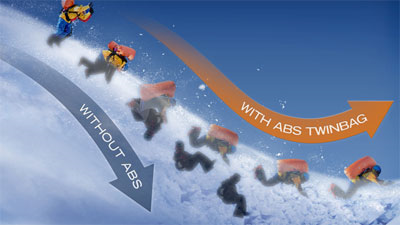