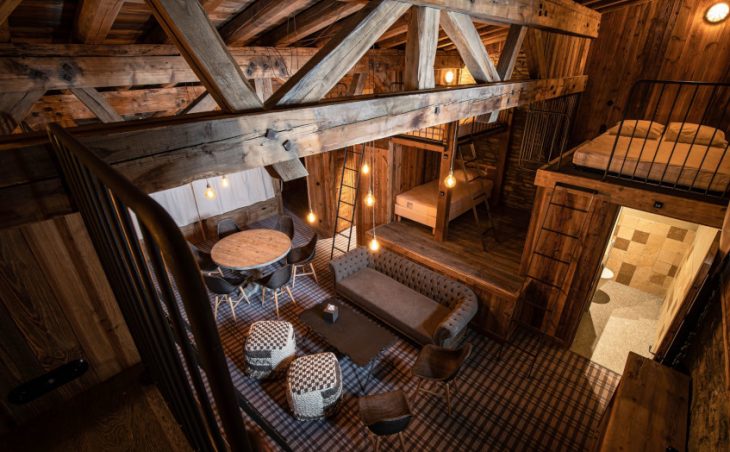 Something special to celebrate?

The Solaise cable car was Val d’Isère’s first ski lift, built between 1939 and 1942. The choice of location was determined very much by the challenging nature of the various descents and it is that choice which largely contributed to the reputation of Val d’Isere and would later justify such slogans as Val d’Isere « Mecca of Ski » and « Resort of Champions ». La Tête de Solaise and its surrounding area also enjoy the longest daily sunshine of the entire resort - hence the name Solaise! Over the past 74 years this lift has transported millions of skiers, snowboarders and nature lovers. Starting in 2018 the original upper cable car station will be completely renovated and transformed into a luxury hotel nestling at 2551m (8.400 ft). The hotel will be launched in its complete version in December 2019

It will then be composed of 3 apartments, 18 rooms, a real dormitory of 14 beds, a restaurant, a superb Spa overlooking the valley, a lounge with library and fireplace, a projection room for evenings or bad weather days, and a space for seminars. From this amazing promontory overlooking the village of Val d’isere Jean-Charles Covarel and Jean-Claude Borel are creating a unique experience in France and the highest altitude hotel in the country: Le Refuge de Solaise. In a prime location close to the old village and the snow front, the Base Camp will offer marvellous 200° views encompassing the source of the Isère to the East and the Face of Bellevarde to the South West. The base camp will serve as the initial reception area for the Refuge and will provide both a fallback solution as well as the alternative location for dual centre village - high mountain vacations.

The Refuge will only be accessible via the ski slopes and the new Solaise Gondola lift so that when the ski lifts close we will be cut off from the rest of the world. Once there and in the silence that follows the closing of the lifts we feel an intense one-ness with the mountains as we feast on the 360° views and discover unexpected confort at this altitude.

3 apartments and 34 rooms all beautifully appointed as well as a dormitory, a restaurant, a superb Spa dominating the valley, a library with fireplace, a projection room for the evenings or bad weather days and a seminar area. Thanks to its amazing location at the summit of Solaise, the Refuge enjoys both sunrise and sunset. The sun rises around two hours earlier in the morning and three hours later in the evening compared to the village. Then, as night falls it gives way to a starry sky of incomparable purity, far removed from the pervasive scourge of light pollution. And when it snows overnight our guests will be the first to enjoy the fresh powder and untouched pistes, even before breakfast!

Perfect for entry level skiers looking for the best price. Refurbished equipment from the Sensation and Evolution categories.

Entry level skis/snowboards perfect for those discovering the thrills of skiing on green and blue slopes. Manageable and reliable skis even on hard snow, that help you make progress whilst having fun.

For all skiers at home on all types of slopes and snow. Comfortable, higher-performance skis/snowboards that guarantee stability and grip even at full speed.

For the most demanding and experienced skiers. The highest quality skis for every terrain, both on-slope and off.

For children 8-11 years at the 3-star or higher, as well as for older kids 12-13 years old at any level. Booking helmets is highly recommended it for beginners and children.

Perfect for kids under 6, to safely carve their first turns. Helmets are highly recommended for children.

PP - Price per person based on full occupancy